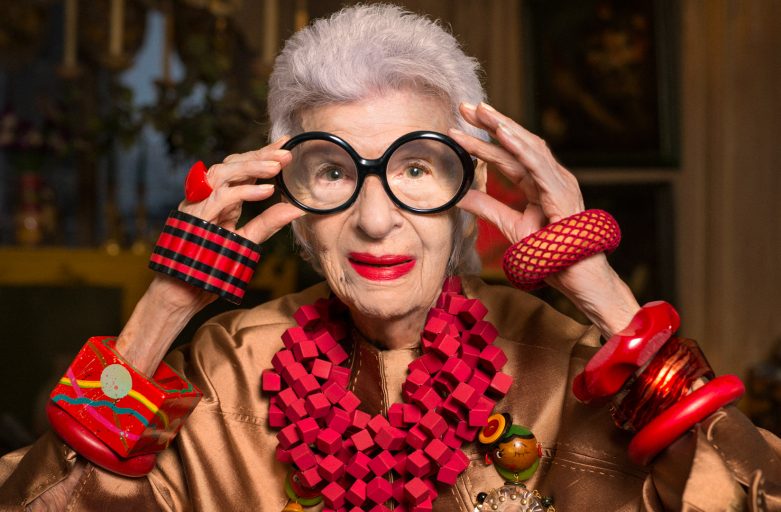 When you see Iris Apfel’s photos for the first time, you are immediately captivated by her eccentric looks.

I couldn’t resist the temptation to capture her style’s most significant aspects and present them in the guise of one of my MadameDoll, among the other “most famous women” dolls. Perhaps not everyone knows that she is one of the most prominent figures in the world of style and fashion.

Iris Barrel was born in 1921, in New York, to an American father and a Russian mother, both Jewish.

Her main attribute is her discretion. In spite of her prestigious professional successes and the extravagance of the clothes she loves to wear, she only became famous to the general public in her old age. A famous and eclectic woman, she easily made it to become one of our “most famous women” dolls.

After graduating in history she started working at the Women’s Wear Daily, a magazine which is considered “the bible of fashion”.

In 1948 she married Carl Apfel, with whom she enjoyed an artistic and commercial partnership that would last until his death in 2015, after 67 years of marriage. They remained at the helm of Old Wild Weavers, the textile company they founded, from 1950 to 1992 when they decided to sell it and retire.

In the meantime Iris Apfel developed a brilliant career as an interior designer. She designed interiors for the White House during the presidencies of Truman, Eisenhower, Kennedy, Johnson, Nixon, Ford, Carter, Reagan and Clinton. Her popularity came along with the new millennium.

In 2018 she published her autobiography Iris Apfel: Accidental Icon. Musings of a geriatric starlet. The same year Mattel released a Barbie styled by her, making her the oldest person depicted in this form and an undisputed icon among “most famous women” dolls. In early 2019 news broke of her signing a contract as a fashion model: at 96, she also became the world’s oldest model.

Among her most quoted phrases is:

The secret to style is to understand who you are. And that takes years and years.

The Museum of Lifestyle & Fashion History in Boynton Beach, Florida, is setting up a pavilion dedicated to a permanent exhibition of Iris Apfel’s clothes, accessories and furniture.

“I wish I could be like her” is what many women think when they picture their future as an elderly woman. What better gift than the one of our “most famous women” doll depicting her?