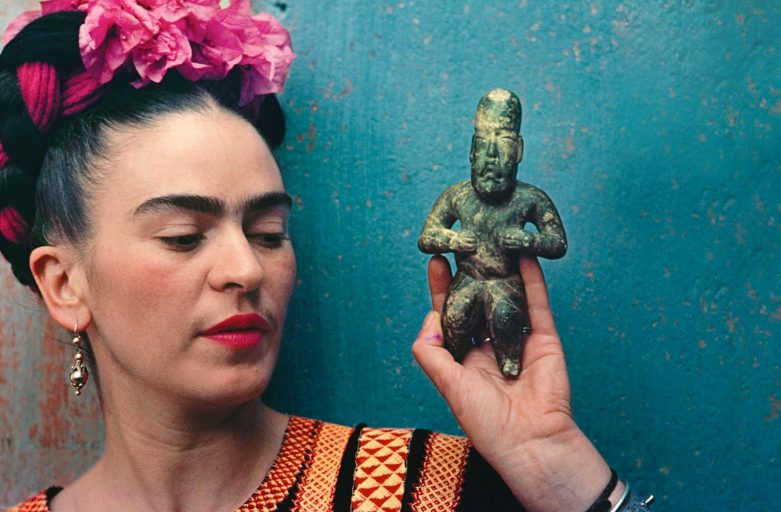 One of our MadameDolls is inspired by a female figure which left a deep mark on the iconographic communication of the 20th century. Each one of the items of clothing worn by Frida and her own hairstyle constitute an ideological and aesthetic manifesto. Frida could not fail to be among our celebrity dolls.

Magdalena Carmen Frida Kahlo y Calderón, famously known as Frida Kahlo, was born in 1907 into a wealthy family in Coyoacánin, a village then on the far outskirts of Mexico City.

Her life was marked by serious physical disabilities which fuelled her artistic experience. Suffering from spina bifida wrongly believed to be poliomyelitis, Frida was involved at the age of 18 in a very serious car accident that forced her to undergo 32 operations. Returning home and bedridden in order to recover, she began to paint self-portraits using a mirror hanging from the ceiling.

Under her blouse our Frida celebrity doll wears her most famous corset, which was decorated with the hammer and sickle symbol.

Passion is the fuel and lead of all aspects of her life and meeting her future husband is a topical moment.

She submits her works to the judgement of Diego Rivera, the famous painter, with whom she falls in love. Her love is returned and they marry twice, in 1929 and 1940, after divorcing in 1939. Their married life was very troubled, with much cheating on both sides. Frida’s lovers, among others,  were Lev Trozckij and André Breton and she is also credited with many homosexual experiences.

Her work of art, re-evaluated in recent years especially in Europe, is largely composed of self-portraits and is close to Surrealism although she always proclaimed herself a realist and linked her aesthetic research to Mexican folklore.

She died in Coyoacán on 13 July 1954, less than a year after her right leg had been amputated following a gangrenous infection.

The Frida portrayed among our celebrity dolls is wearing clothes that made her an icon throughout the world. For her garments Frida was inspired by the costume worn by the women of Tehuantepec, a municipality renowned for its matriarchal management of the community. Her doll wears a hipil, a cotton blouse embroidered with square floral motifs, a rabona, a wide yellow silk skirt and a rebozo, a shawl with fringes. She also wears a corset decorated with a hammer and sickle. The hair is styled with the typical maxtahual decoration of pre-Hispanic origin, consisting in threads of wool, tlacoyal, woven into the hair.